The history of Caesar Augustus

The subject of any number of picture postcards, the statue of Ceasar Augustus has become a symbol of Capri, of the hotel, and of the history of one of Italy's finest five stars.

Russia's Prince Emmanuel Bulhak, one of the first owners of the villa and the man responsible for transforming the cliff edge property into a center of art and culture, had the statue placed on the corner of the terrace over a century ago.

1850
Villa Bitter, residence of a wealthy German gentleman
1875
An inn providing refreshment to those travelling along the road linking Capri and Anacapri, and up the Phoenician steps, which terminate in the immediate vicinity
1900
The villa is purchased by the Russian prince, Emmanuel Bulhak, who places the famous statue of Caesar on the terrace
1940
Prince Bulhak sells the villa to the Signorini family, responsible for its transformation in hotel
1995
Paolo Signorini abandons his successful career in industry to devote all his time and energy to the family hotel
dal 2000
Caesar Augustus receives numerous awards and, year after year, is classified as one of the best hotels in the world

First recorded mention of the Caesar Augustus dates back to the second half of the 19th century: a number of period photos testify to the existence of a certain Villa Bitter, owned by a wealthy German gentleman. In the years that followed, the villa was transformed into an inn offering refreshment to the men building the road between Capri and Anacapri, and to all those walking up the Phoenician Steps which, until the road was completed in 1878, represented the only connection between Anacapri and the rest of the island.

At the start of the 20th century, foreseeing troubled times for the nobility in his home country, Russia's Prince Emmanuel Bulhak, decided to move to Anacapri. A wise move indeed, considering how many of his titled friends ended up as dishwashers in Paris following the October revolution. In Anacapri, Bulhak purchased Villa Bitter and transformed it into a center for art and culture.

Bulhak was the man responsible for placing the statue of Caesar on the terrace.

Guests often ask us why the statue is of Caesar Augustus and not Tiberius who, according to the most accredited historical accounts, was the Emperor of Capri. Well, it transpires that Bulhak was something of an expert in ancient history and supported the theory that it was Augustus, and not his stepson, who made Capri famous.

In support of this theory, the Russian prince placed a stone next to the statue, engraved with the following words:

"To Caesar Augustus, emperor of the world, lover of the island of Capri, which on the land amidst the waves of the sea shines like a jewel worthy of an emperor"

The statue is a 19th century copy of the Augustus of Prima Porta, found in Villa Livia in Rome. The Prince decided to place it on the far corner of the terrace, with the hand pointing towards Villa Jovis, the magnificent residence built by Augustus' stepson Tiberius, on the opposite side of the island.

Towards the end of the fascist period, sensing the winds of war once more, Bulhak decided to move to England and to sell the villa to the Signorini family.

In the immediate post war years, in the late 1940's, the Signorini family transformed the villa into a hotel. Managed by Paolo Signorini, the property soon evolved into an award-winning 5 star hotel, consistently ranked amongst the best luxury resorts in the world. 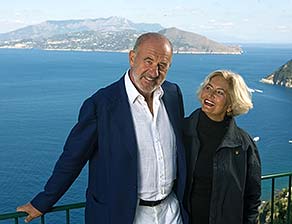 Born in Naples, under the sign of Virgo. A successful businessman, excellent cook and acclaimed yachtsman, in 1995 Paolo abandoned his dream to sail around the world and decided to devote his time and energy to Caesar Augustus instead. His love for the hotel has continued to grow ever since. Aware of the huge responsibility of managing a hotel worthy of the immense natural beauty and incomparable views of the Bay of Naples which surround the villa, with patience and passion, and with the help of his wife Patrizia and their dear friend Fifi, he restored each and every room so as to give the Caesar Augustus the warmth of a much-loved private home. Paolo continues to supervise the running of the hotel and you can be certain that, just like Augustus, nothing escapes his attentive eye.

Also born in Naples, but by chance. The love affair between her Neapolitan father and Swiss/German mother, which began during the second world war, resulted in the birth of three beautiful sisters. Her mixed heritage explains Patrizia's warm Neapolitan heart and steely German determination. A lady of undisputed elegance, from 1995 Signora Signorini has been hunting the world over for antiques and artworks with which to decorate the hotel, just as if it were her own private home. Every single item is the result of meticulous attention to detail and her love for the Caesar Augustus. Today she too supervises the running of the hotel (and her husband Paolo!).